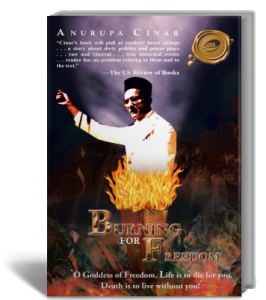 Incredible as it may seem, this is a true story. The facts, incidents, and situations in this novel—whether directly given or referred to in conversations—are true and documented. There are a few exceptions which are noted in the Author’s Note section. Experiences of Keshav Wadkar, the fictional character, are coined from true life experiences of others.

The story unfolds in the year 1913 in India in the dreaded penal colony of the Andaman Islands. Any voice in India that dared to speak out in favor of freedom was promptly squashed by the British, who were ruling there for years. That freedom fighter was subjected to a cursory trial and banished to a penal colony. Vinayak Damodar Savarkar, who was considered the most dangerous freedom fighter, one who threatened the very stability of the British Raj, was sentenced to a total of fifty years of exile to Andaman. He and the other political prisoners there were subjected to unspeakable, unsupportable horrors. In March of 1913, Keshav Wadkar (a fictional character just fourteen years old), is also brought here, sentenced to twenty-five years exile in Andaman. When within an inch of succumbing to the crushing isolation and the calamities that fall upon his young head, he is connected to his hero, Savarkar, and finds salvation under his guidance and encouragement. How these brave political prisoners prevail under the terrible, torturous conditions in Andaman, how Savarkar betters the life of all with his perseverance and perspicacity against all odds, even when on the brink of death, is here for the readers to experience.

While these patriots are suffering agonies for daring to fight for freedom, the fate of India by 1918-19 is moving into the hands of the charismatic, spiritual leader Mohandas Karamchand Gandhi. Gandhi wins over the hearts of all the Indians and takes the freedom movement into the homes of the common man on the one hand, and on the other drives the freedom movement into a ditch by attaching it to the Khilafat Movement, a movement started by the Muslims in India who wished to see the Sultanate of Turkey reinstated with all its glory after the defeat in WWI. He promises the Indians freedom within in one year of a nonviolent, noncooperation movement.

At this time, several of the political prisoners in Andaman are granted amnesty. Keshu (Keshav Wadkar) is one of them. He returns to his hometown, Pongur, in the Malabar area of India to vegetate. Gandhi’s Movement is in full force. The Moplahs, Muslim’s of the Malabar area, picking up the flag of the Khilafat Movement, the primary object of Gandhi’s Movement, cause horrendous, vicious rioting—raping, killing, looting and converting the Hindus. Keshu’s village is one of their targets and his mother meets a vicious death at the hands of the rioters.

Keshu retires to Poona to the home of his maternal uncle to lick his wounds, his mind tortured by the death of his mother and the plight of Savarkar, now brought to the Indian mainland jails. Here Keshu finds love and gets married.

The noncooperation movement does not move the British into giving freedom to the Indians. But Gandhi and the Congress manage to extricate themselves from this debacle without losing face. The Indians, however, are left high and dry to face the wrath of the British. In 1924, Savarkar is released, though not set free, from the jails and sent to Ratnagiri, a backwater District in the Bombay Presidency. Keshu and his wife immediately leave for Ratnagiri. It is Keshu’s intention to devote his life serving Savarkar and his cause.

In Part II which begins in 1938, Savarkar swoops like an eagle over the political scene in India. Gandhi, who is now the undisputed virtual dictator of Congress, has brought the Indian freedom movement on the brink of disaster. Partition looms on the horizon with Jinnah, the leader of the Muslim League and an excellent politician, clamoring for it. The Congress, under the leadership of Gandhi and Nehru, is looking more toward securing power for themselves in free India than securing freedom, and certainly not trying to keep Indian undivided.

These questions and more are all answered in the gripping the tale of the Burning for Freedom.

Description: Videos giving info on Savarkar's biography and important phases of his life.